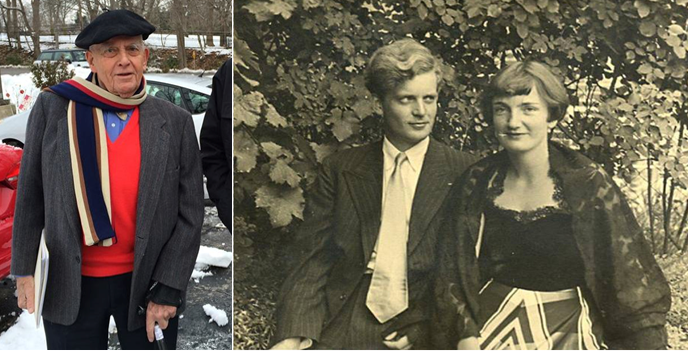 Georg Nicolaus Knauer, Emeritus Professor of Classical Studies at the University of Pennsylvania, died on October 28, 2018 in Haverford, PA at the age of 92. His long life and career were distinguished by high scholarly achievement and enriched by extensive travel and many friendships. He was also deeply involved in political controversies that were the result of two tragic events that affected so many Germans of his generation: the rise of National Socialism in their youth and the division of Germany into two separate states in their maturity.

Nico, as his friends knew him, was born in Hamburg on February 26, 1926. In 1944, he was drafted into the Wehrmacht and dispatched to the Eastern front at a time when the German defense against the Red Army of the USSR was starting to collapse. Very soon after his arrival, he was almost killed by a land mine, which destroyed most of his right leg. That he even survived is remarkable enough, but his relentless refusal to let this injury limit his activities is in some ways even more so.

After the war, Nico studied Classics at the University of Hamburg with Ernst Zinn, the classicist who also produced that generation’s standard edition of Rilke’s complete works. Nico earned his PhD in 1952 for a dissertation on Psalm citations in the Confessions of St. Augustine, which laid the methodological foundations of his subsequent work. From 1952 to 1954 he was a fellow at the Institute for the Thesaurus Linguae Latinae in Munich, and then from 1954 to 1974 he taught at the Free University of Berlin, rising through the ranks from Assistent to Professor Ordinarius. He is best known for the book that originated as his 1961 Habilitationsschrift on Vergil’s imitation of Homer in the Aeneid, which was published as Die Aeneis und Homer in1964. During these same years, he was a British Council Scholar at the University of London (1957–1958), Visiting Professor at Yale University (1965–1966), Nelly Wallace Lecturer at Oxford University (1969), and a member of the Institute for Advanced Study (1973–1974). In 1975 he moved to Penn, where he remained until his retirement in 1988.Honors continued to accrue: he was in 1978 Visiting Professor at Columbia University, in 1979 a Guggenheim Fellow, in 1984 a Fellow of the National Endowment for the Humanities, in 1985 a Resident of the American Academy in Rome, in 1989 a Resident of the Rockefeller Foundation in Bellagio, and in 1991 and 2002 a Guest Researcher of the Herzog August Bibliothek in Wolfenbüttel.

At the time of his death, Nico had been working for years on a vast project to catalogue and contextualize commentaries on and translations of the works of Homer from antiquity to the Renaissance. Although he was not able to see the project through to publication, he left it very close to completion, along with a substantial archive of research materials on which it is based.  It will be finished and published posthumously, and he made provisions for this to happen.

No remembrance of Nico Knauer could be complete without mention of his wife, Kezia, with whom he shared his personal and professional life from before their wedding in 1951 until Kezia’s death in 2010. Kezia’s real name was Elfriede, and she used that name officially, e.g. as the author of many scholarly publications; but almost no one called her that, and therein lies a tale. Because she and her twin sister, Sybil, were born while their father was away on a business trip, the babies were not actually named until his return. In the interim, a midwife decided to call them Kezia and Keren-happuch after two of Job’s daughters from his second family (cf. Job 42.14). The name Kezia stuck, because everyone hated Elfriede, with the result that many people were unaware what Kezia’s “real” name was. (According to family lore, during a party to celebrate Nico and Kezia’s wedding, Nico’s father answered a phone call from a well-wisher, which caused him to turn to those assembled and ask, in puzzlement and horror, “Is there anyone here named Elfriede?”) Kezia was a classical archaeologist and art historian who specialized in iconography, but became an expert in an astoundingly wide variety of subjects. Perhaps chief among these was the Silk Road as a vector of culture between East Asia and the ancient Mediterranean basin. One result of this interest was that Nico and Kezia spent decades traveling together, he in search of humanist translations and commentaries on Homer (the bulk of them preserved in unpublished manuscripts in European libraries, large and small), she in pursuit of information about all aspects of trade, religion, art and architecture, and especially textiles, in the Middle East, Central Asia, and East Asia. Together, Nico and Kezia were among the last foreigners to visit freely countries like Afghanistan (where they photographed the now-destroyed Buddhas of Bamyan) between the time when that country’s war with the Soviet Union ended and the current American war against the Taliban and Isis began. When the improbable Karakoram highway between Pakistan and Xinjiang province in China was completed, they were on a bus there a few months later, rolling past washouts at high altitudes. They were genuinely indefatigable.

After more than half a century, Nico’s study of Vergil and Homer remains one of the most frequently cited books in the field of Classics, and it enjoys what will probably be a permanent place in bibliographies of Vergil and Latin literary studies generally. Its success is the more remarkable in that not all agree with its premises and methods, which are extremely positivistic and, as such, somewhat out of synch with contemporary notions of imitative, emulative, and allusive relationships among classical poets. Still, there are few serious students of Vergil who have not profited from this work. Indeed, it has advanced the field by inspiring both adaptive imitation of its methods among sympathetic scholars, and committed opposition, revision, and the adoption of methods based on quite different assumptions on the part of skeptics. In addition, despite an approach that looks back to the nineteenth century rather than forward to the twenty-first, the book is in many ways ahead of its time, not only in its firm commitment to the study of what ae now called intertextual relations as a fundamental and immensely creative component of classical Latin poetics, but also in its anticipation of contemporary reception studies. This is especially evident in its first chapter, which traces the growing familiarity with Homer in the early modern period through the gradual discovery by generations of Vergilian commentators of Homer’s extensive and detailed influence on their poet.

Although Nico’s scholarly vision drove him to take on projects of such scope that they would seem to have left him no time for other pursuits, he was deeply committed to the defense of specific social principles. His youthful experience of National Socialism convinced him that, after the end of World War II, it was of the utmost importance that European and, especially, German society be on the alert against any possible recrudescence of similar pathologies. Understandably, he initially expected that the likeliest threat would be from the political right; but his experience of Cold War realities in a divided Germany, and especially in occupied Berlin, convinced him that there was a more imminent danger from the left. Like many other German professors, he found it impossible to teach in the supercharged ideological atmosphere of the late sixties and early seventies. In response, he became one of the founding members and leaders of the Emergency Organization for a Free University (Notgemeinschaft für eine freie Universität) and the Freedom of Science Federation (Bund Freiheit der Wissenschaft). Ultimately, the volatile political situation caused Nico to move to the U.S. and to leave political action, though not strong political beliefs and opinions, behind.

Nico’s personal habits were ascetic and sybaritic in approximately equal measure. When he was hot on the trail of new evidence or the solution to an old problem, he would work long hours in the library without a break, sustaining himself with nothing but occasional spoonfuls of freeze-dried coffee crystals. When he felt he had the time for a proper lunch, he made it an occasion, usually enjoying the company of just one friend at a time, always with a carafe of white wine within reach. In either mode, even younger colleagues found it challenging to keep up with him. His enthusiasm for work and pleasure were equally great. The dinner parties that he and Kezia hosted from time to time in their high-rise apartment, filled with books and overlooking Philadelphia’s Fairmount Park, were memorable events. Nico always cut a dashing figure, with his bow ties (many of them made by Kezia from fabrics collected during their travels), his beret, his scarf (a souvenir from a visiting stint at Corpus Christi College, Oxford), and his silver-handled walking stick. He drove his red VW Golf, specially outfitted to accommodate his injury, like a Formula 1 racer. He especially enjoyed driving in Rome. His Penn students were in awe of both his personal and his intellectual style, recognizing that, through him, they had some contact with scholars like Eduard Fraenkel, Bruno Snell, Otto Skutsch, and many other great names from long ago and far away. He felt keenly the responsibility to pass on what his teachers had given him, insisting that the entire point of our work is to serve “the next generation,” one of his favorite and most often repeated phrases.

Nico Knauer is survived by Dr. Sabine Solf, his close companion during the years since Kezia’s death, a few family members, and many devoted students and colleagues.