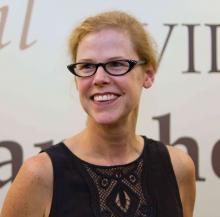 Joy Connolly works mainly on Roman ideas about politics, rhetoric, and aesthetics, their reception in eighteenth- and nineteenth-century England and America, and their ongoing relevance for contemporary democratic life. Her first book, The State of Speech (2007) placed the ability to communicate at the heart of Roman ideals of citizenship. Her second book, The Life of Roman Republicanism (forthcoming 2014) examines key themes and affects in Roman republican political thought: freedom, recognition, antagonism, self-knowledge, irony, and imagination. Her next project, Talk About Virtue (under contract in the Classical Inter/Faces series with Bloomsbury Press) spotlights key moments in the revival of ideals of Roman civic virtue in revolutionary thought and practice in the eighteenth through the twentieth centuries.  Themes of special interest include nostalgia, violence, and extremism, and the thinkers studied range from Benjamin Constant to Hannah Arendt. Her reviews have appeared in the Times Literary Supplement, the Women’s Review of Books, Bookforum, and The New York Times Book Review, and she has worked as a player/interpreter with the Berlin-based artist Tino Sehgal in pieces mounted at the Marion Goodman Gallery and the Guggenheim Museum. Among her awards and honors are fellowships at Stanford University, the Princeton University Center for Human Values, and the Netherlands Institute for Advanced Study, as well as NYU’s Golden Dozen Teaching Award.