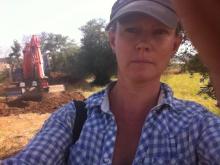 My research has undergone a significant shift in both focus and practice in recent years. While I continue to work on the archaeology and material culture of the Roman and later Roman worlds, I have gradually moved from a focus on late antiquity and the archaeologies of religion and elite space, to an interest in historical economies with a particular focus on poverty and the lived experience of the poor. A recent two-volume study on Roman peasants in Italy reflects both an effort to reorient Roman archaeology and economic history towards a greater attention to non-elites, and my own methodological shift towards an integration of archaeological and scientific data, anthropological theory and historical economics.

From 2009-2015 I codirected the Roman Peasant Project with collegues from Penn and Italy and beyond. The Project was the first systematic study the lifeways and experiences of Roman peasants in Italy, and was supported by the National Science Foundation, the Loeb Foundation and the Penn Museum. The final two-volume publication, The Roman Peasant Project 2009-2015: Excavating the Roman Rural Poor, was published by the Penn Museum/ UPenn Press in 2021.

I'm now writing a book on poor economics for the Roman empire. Tentatively entited, Getting by under the Roman Empire: An Economic History of the 90%, the volume offers a critique of growth-centered, top-down models of Roman economic history, and posits in their place a series of household-level studies, grounded in new work in development econonmics, that interrogate the opportunities and stresses experienced by working people.

I'm currently on leave as a Guggenheim and National Endowment for the Humanities Fellow.